The Eurovision Song Contest Tengaged, often abbreviated as ESCT, is a song contest held between countries which was created in the website of Tengaged since May 7th 2014. The contest is produced by Alejandro Ramírez.

It is inspired by Eurovision Song Contest and was created for European countries which participated at least once in the ESC and are active TBU members, who must submit an original song to be performed on live television and radio. They also cast votes which are translated into points which are then awarded to the most popular songs from each country. The winner is the country with the most points at the end of voting, who also win the right to host the next edition.

As of #5, countries must qualify from one or two semi-finals. Hosting nations automatically qualify to the grand final, as well as the other four highest scoring entries in the previous contest.

Once every three editions

Every edition
Some little countries without their own singers can borrow artists from the neighbours: 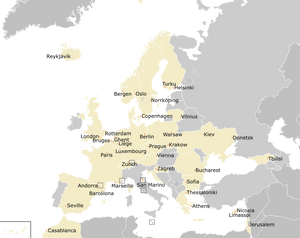 Map with all the host cities of ESCT.
The contest's format has been changing during several editions. It was only kept the same for the first three edition, letting only 26 participants to compete in the contest, although in the first edition only 20 countries competed. Since the fourth edition, more than 26 participants were allowed to compete and for this reason the very first semifinal was held where 21 finalists out of 26, qualified for the grand final. In the fourth edition, there was also a big 3 who scored the three highest votes from the previous edition and were automatic qualifiers; Ireland, Poland and Ukraine. However, for the next editions, the big 3 would change to big 5 and the top 5 from each edition will be a part of the big 5. It was the only season holding a unique semifinal while the rest editions have kept two semifinals. The top ten scored countries from each semi-final advanced to the final. 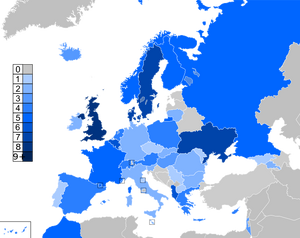 Map showing the "participation" of a country in the Big 5 up to the thirty-second edition.
In the fourth edition, the very first "Big 3" was introduced and it was composed by the top 3 countries from the previous edition. However, in the fifth edition because of the increasion of the amount of countries and the appeareance of the two semifinals, it was decided to change the "Big 3" to the "Big 5" to finally make a grand final of 25 countries, formed by the "Big 5" and the top ten scored countries from each semi-final. Due to some countries from the "Big 5" withdrew in several editions, a new rule was established which it consists that if a country from the "Big 5" withdraw, the sixth placed country of the previous edition would replace it. During the tenth edition, it was rumored that the "Big 5" would be changed to a "Big 6" where an additional country, the winning country of OOESCT will take part in the contest every edition. The TBC said that the idea was being considerated and that a definitive decision was not taken yet.

Members of the Big 5 through the editions have been several, but the countries with more appearances were Greece, Iceland, Sweden and Ukraine, holding the record of being in the "Big 5" three times. Belgium, Cyprus, Denmark, Finland, France, Hungary, Monaco, Morocco, Russia have been in the Big 5 for at least two editions. Greece also holds the record for being a member of the Big 5 for three editions in a row.

This is the list with the editions in which every country made their début:

This is the list with the editions in which some countries withdrew from the contest:

This is the list with the editions in which some countries returned to the contest: 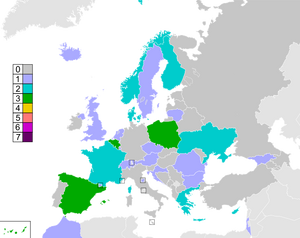 Map showing the number of winnings of a country up to the thirty-seventh edition.

The contest has so far twenty-six different winning countries with most of them being Western countries (Andorra, France, Spain, United Kingdom...). The only country winning two editions in a row has been Poland in the second and third editions. Most of the winners have so far been female artists except from the winners of the second, seventh, twenty-third and thirty-seventh editions who has been a male artist, while in the tenth edition which has been a a female-male duet.

United Kingdom is the country with the most second places so far, with five silver medals. In the third edition, Poland won the edition setting a new record for the host country's place. Netherlands's winning entry currently holds the record for the highest scoring winner with 251 points. Poland also became the first country to win three times.

Fifty countries have participated at least once in the Eurovision Song Contest Tengaged.

1.^The country was disqualified for breaking the rules in ESCT #15.

A number of spin-offs and imitators of the Eurovision Song Contest Tengaged have been produced, some national and other international.

Similar competitions that are still held, include:

Retrieved from "https://esct.fandom.com/wiki/Eurovision_Song_Contest_Tengaged?oldid=5618"
Community content is available under CC-BY-SA unless otherwise noted.